Different dogs react to storms in different ways. A dog may become anxious or agitated long before a storm arrives and send signals that lightning flashes and roaring thunder are on the way. Restlessness, excessive panting, trembling, whining, and drooling are common symptoms of a storm phobic dog. Some pups seek to stay extremely close to their owners while others try to hide in what they consider a safe place. Other dogs are not phased and sleep through the whole event. It is thought that these dogs aren’t as sensitive to the forewarnings of an approaching storm.

No one yet knows why some dogs are outstanding predictors of the weather while others are not. The storm predictors do not have a sixth sense or ESP, but they are sensitive to many atmospheric changes associated with a storm including static electricity, barometric pressure, lightning, thunder, ozone, and more.

As storm clouds gather, turbulence within them creates static electric charges that build up until they are released as a stream of electrons we see as a bolt of lightning. The huge static electric sparks jump from cloud to cloud or from cloud to an object on the earth. The super-heated lightning creates a shock wave that is the sound of thunder.

Studies show that static electricity in the air can cause a dog to feel an uncomfortable tingling in his fur. Dr. Nicholas Dodman, director of the Animal Behavior department of the Cummings School of Veterinary Medicine at Tufts University in North Grafton, Massachusetts says that dogs may even experience numerous shocks from static electricity during a thunderstorm. This can cause a dog to instinctively jump into a bathtub or hunker in another place in your home that is grounded.

You can minimize the effects of static electricity on your dog by rubbing dryer sheets on his fur before and/or during a thunderstorm. Use unscented sheets if you try this. Some strongly scented brands can cause reactions in people and dogs.

Barometric pressure or the pressure against the Earth’s atmosphere decreases with the approach of a storm. You may have an friend who feels discomfort in his joints when this occurs. The decreased pressure allows joints to expand . An older dog may also feel discomfort but perfectly healthy pups are sensitive to barometric changes and know that a storm is looming.

My Irish Wolfhound, Logan, sensed changes in barometric pressure and knew a storm was on the horizon. She practically glued herself to my side as a storm approached and stayed in contact with me until it had moved well out of the area. My presence may have been a source of comfort and safety for her, or perhaps Logan was trying to herd me to safety.

Dogs can also smell an approaching storm. Surely, you have sniffed the air and knew rain was coming. Weather patterns produce distinctive odors that sensitive noses can detect. A dog’s sense of smell is 10,000 times more sensitive than yours so he can smell an approaching storm at a much greater distance than you. According to a report from NASA, about 77 million ozone producing lightning bolts strike the U.S. annually. Ozone has a distinct metallic smell. It is one of many storm associated scents that a dog can detect long before we are aware that a storm is brewing.

A dog can also hear an approaching storm. We hear thunder when a storm is basically on top of us or at least very near. On average, a dog’s hearing is 20 times more sensitive than ours so he can hear thunder far in the distance. Your canine friend can also rely on his sense of touch and feel the vibrations of thunder in his paws long before we can hear or feel it.

If your dog becomes anxious and sends warning signals that a storm is on the way, better give him lots of calming love and carry your umbrella. 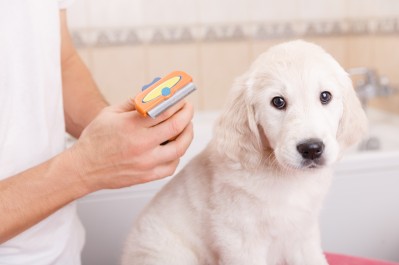 5 Important Things Your Dog Groomer Wants You to Know 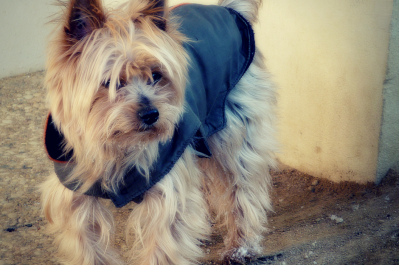 Why Is That Dog Wearing A Sweater? 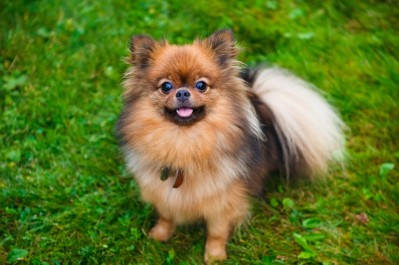 The Benefits of Owning a Small Dog