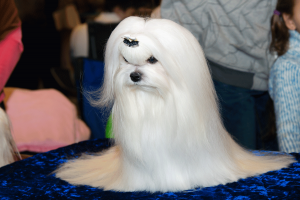 In honor of the recently held Westminster Kennel Club Dog Show, NuVet thought it would be fun to list 10 fun facts about one of the countries longest running public sporting events. Read on to discover and enjoy some interesting historical facts.

1) The Westminster Kennel Club Dog Show is the Longest running American sporting event next to the Kentucky Derby. The Westminster Kennel Club Dog Show has been around since 1877. To put this into some perspective, this means that people were going to dog shows before they were going to the World Series, driving cars down the street or enjoying the benefits of the light bulb!

2) Most of the winners of the Best in Show competition have been from the terrier group, which consists of breeds like the Airedale, Cairn, Fox, Irish and many others. This group is followed by the sporting group, which contains breeds such as the Cocker Spaniel, English Setter, Golden Retriever and the Weimaraner.

4) Winners get to have dinner at New York’s famous restaurant Sardi’s in Manhattan. This year, Miss P dined on steak, which was fed to her by the restaurant’s president.

5) The show has always been held at the “Madison Square Garden,” even though the venue has been re-built 4 times.

6) Shockingly, despite being two of America’s most favorite dog breeds, the Labrador Retriever and Golden Retriever have never won Best in Show.

7) Since 1884 participants must be registered with the American Kennel Club (AKC).

8) Mixed breed dogs have been allowed to participate in an agility event since 2014. All other events at the show are for are purebred dogs.

10) The Westminster Dog Show was an American event before there were 50 states. When the first Westminster Kennel Club Dog Show took place the United States only consisted of 38 states. Several of those missing at the time include Washington, Idaho, Utah, and Oklahoma.