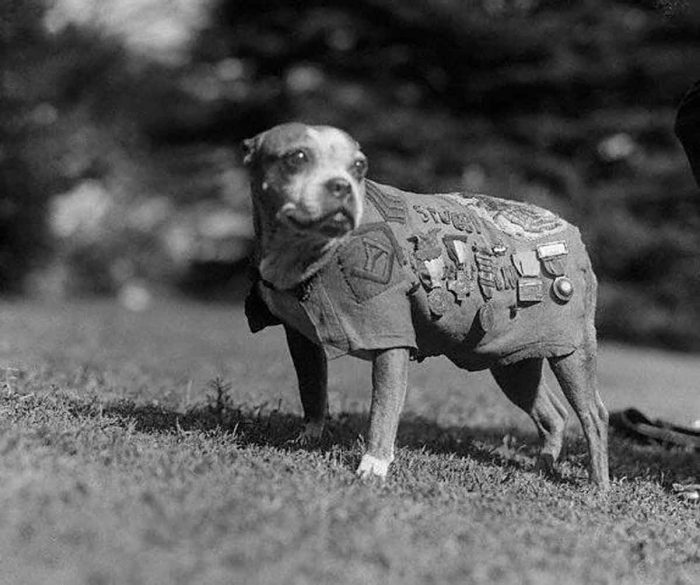 We should honor all of our military personnel every day of the year but Memorial Day has been designated as a national holiday to remember those who lost their life in the service of our country.  Our military men and women deserve special thanks as do the military dogs that serve with them. Today, teams of working dogs and handlers are trained at Lackland Air Force base near San Antonio. In WWI there was no program to train military dogs but Stubby, a homeless pup with exceptional people skills, became famous for his service to the troops.

In the summer of 1917, a young mixed breed dog that from appearances probably had more than a little Pit Bull and Boston Bull Terrier in him was a stray wandering the grounds of Yale University. At that time the 26th(Yankee) Division of the 102nd Infantry Regiment was training at Yale Field. The little stray began to hang around with the soldiers and formed a special bond with 25 year old Private James Robert Conroy. About this time, the pup became known as Stubby. His little stub of a tail may have prompted the name.

Stubby was a very smart and energetic little guy who was not satisfied to simply be a pet. He learned to respond to the different bugle calls that organized a soldier’s day and marched in formation with the troops during training. Conroy even taught Stubby to sit up and salute with his right paw. The pup obviously enjoyed interacting with his human buddies. 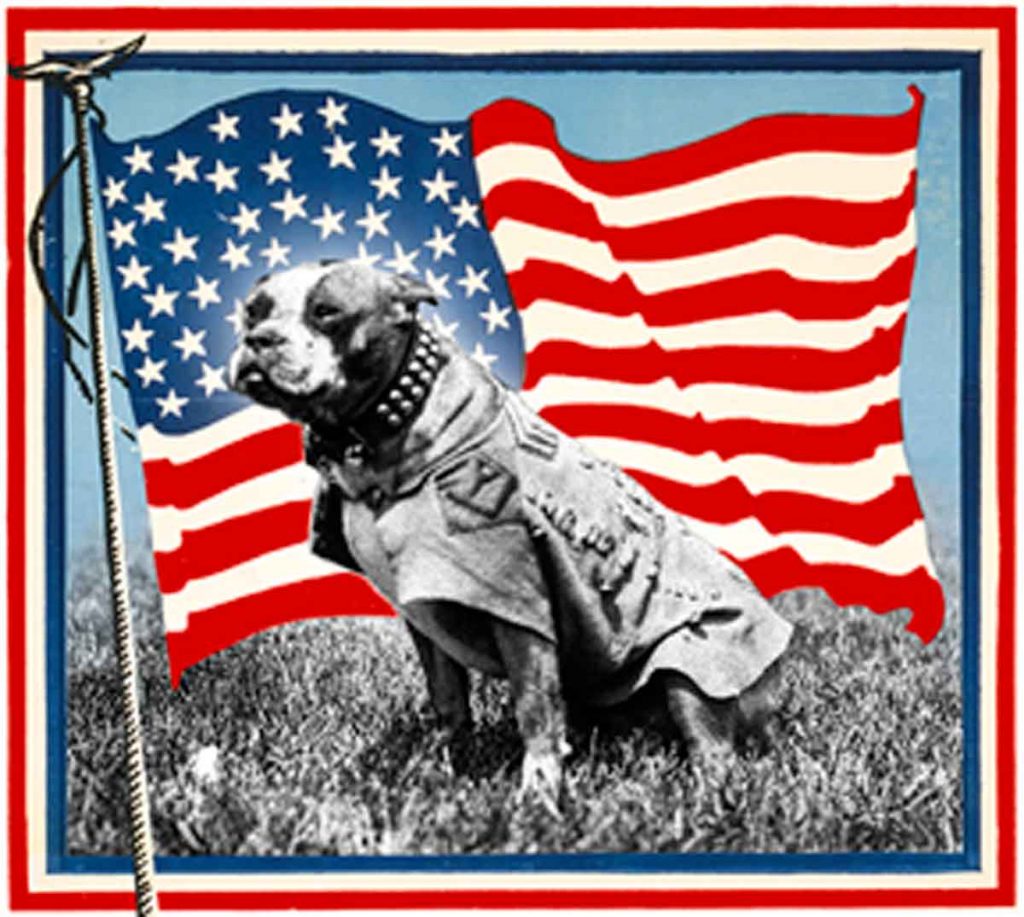 The regiment was scheduled to leave the training grounds in late summer and prepare to ship overseas on the S.S. Minnesota. Conroy refused to leave the newest recruit behind so he smuggled him on the train to Newport News, Virginia. The story goes that a crew member hid Stubby in a coal bin on ship, and he traveled the seas with his pals. They landed in France with the 102nd Infantry, Yankee Division and were on the front line February 5, 1918.

Upon landing, Conroy hid the pup in a blanket as they disembarked, but his presence was soon discovered by those in command. His military salute melted the heart of the commander and Stubby was accepted as an official part of the unit.

Stubby participated with valor in seventeen WWI engagements and was allowed to run freely through the trenches. He often heard the moans of wounded soldiers and barked to alert others to remove them to safety. Stubby suffered a chest wound from shrapnel from a German hand grenade in no man’s land between the trenches. Pvt. Conroy did not hesitate to crawl out under fire and retrieve his wounded buddy.  Stubby was evacuated by ambulance to an aid station like any other soldier. He was treated and recuperated for six weeks before returning to duty.

During another battle, Germans launched mustard gas that severely poisoned Stubby. Once again, he was nursed back to health. Exposure to the gas made Stubby very sensitive to the smell. One night he detected the gas from a German attack wafting in while soldiers slept. He ran through the trenches barking and nipping to wake sleeping troopers. His valiant effort saved many lives. On another occasion, Stubby found a German soldier mapping American trenches. He caught and reportedly held the intruder by sinking teeth into his buttocks until soldiers arrived to take charge of the spy.

The 102nd helped liberate Château-Thierry. In an expression of gratitude, the women of the town made Stubby a chamois blanket “uniform” embroidered with the flags of the allies, a Yankee Division patch on each shoulder, and “Stubby” on the left side. Stubby received many military medals, badges and patches including a Purple Heart that later adorned his “dress uniform”.

The “war to end all wars” terminated on November 11, 1918. Before leaving for the US, Stubby met President Woodrow Wilson on a Christmas visit to France in 1918. He was the first military dog to be promoted to sergeant. Stubby’s field promotion to sergeant meant he outranked most of the men he served with in Yankee Division including Pvt. Conroy. Conroy had to smuggle Stubby to the war but he certainly did not have to sneak him aboard ship to get him home. The entire Yankee Division and many high ranking officials acknowledged him as a hero.

John Conroy took Stubby with him and enrolled in law school Georgetown. It didn’t take long for Stubby to become mascot of the football team. At half time, he nudged a football around the field with his nose to the delight of the crowd. It is said that his antics inspired the elaborate half time shows we see today.

Stubby did not lose his life in battle although he came close more than once.  He was loved, well respected and is fondly remembered for his service as the first of a long line of military dogs that faithfully serve to protect our country.