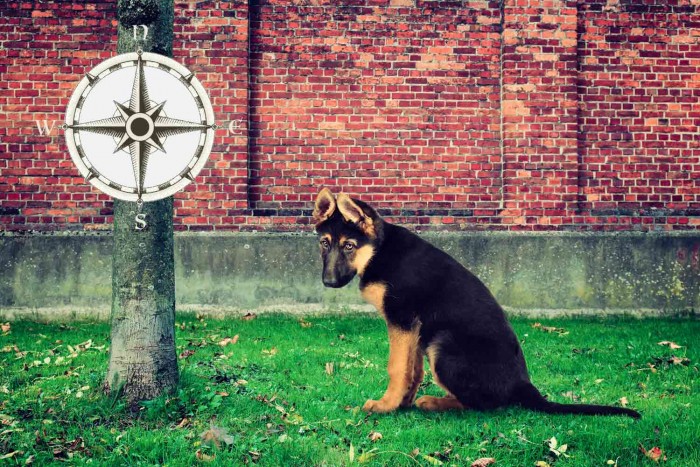 As a dog owner, you have no doubt watched your pet snoop and circle to find just the right spot to lift a leg, squat, or leave a poop deposit. It sometimes seems quite a chore for him. Once his mission is complete, you are left to scoop the poop for proper disposal. You may use lavender scented bags to make the job a bit more pleasant.

You probably never give much more thought to your pet’s elimination habits after you clean up. Science is taking the knack of pooping one step farther. Research is looking at whether your dog aligns himself North-South or East-West when he poops and pees.

Zoologist Hynek Burda of Germany’s University of Duisburg-Essen noted that many animals are sensitive to the magnetic field of the earth. It is well established that birds, bats, turtles, whales, salmon and even lobsters are affected by “animal magnetism” to navigate.

There is strong evidence that a bird’s eye can actually see the earth’s magnetic field and uses it as a compass as he migrates. Scientists have determined that baby sea turtles have their own internal version of GPS that keeps them heading in the right direction as they make 8,000 mile round trip journeys in the Atlantic Ocean.

Acknowledging the many different species including mammals that are sensitive to the earth’s magnetic field, Burda and a team of researchers chose to look for examples of the expression of magnetic alignment in dogs. They studied the elimination habits of 70 dogs of 37 breeds for a period of two years. That amounted to recording 1,893 defecations and 5,582 urinations. The dogs were observed in a free-roaming environment with no leashes, walls, roads or other obstacles that would influence their linear movement.

The researchers also took into account other factors like wind direction, sun position and curiosity and made sure their influence was negligible. The scientists found that when the magnetic field was calm, the dogs preferred to have their bodies aligned with the North-South axis to defecate. The dogs completely avoided East-West orientation. However, small variations in the earth’s magnetic field caused the dogs to totally lose their alignment preference for North-South.

It is unclear why dogs prefer the North-South axis and avoid East-West. It is possible that they perceive the compass direction through their senses. Perhaps they “see”, “hear”, or “smell” the magnetic field and consciously align North-South. Another possibility is that they receive the magnetic influence on a vegetative level and simply feel better or more comfortable when aligned North-South and feel worse or less comfortable when in the East-West orientation.

Burda and his group suggest their findings encourage further research concerning how animals use magnetic fields for direction. Science has not begun to scratch the surface of how directional magnosensitivity works nor why it is beneficial to animals.

Become a scientific detective, and make your own observations. Take a compass when you walk your dog. Your findings will not add scientific data points, but you can have fun determining how often your dog aligns on the North-South axis to pee and poop. According to Burda’s conclusions, your pet will probably line up with the earth’s magnetic field more often than not. If that is not the case, you may be left to wonder if there is a disturbance in the magnetic field where you live.