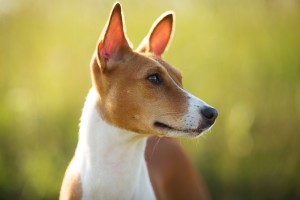 NuVet knows that fans of its blog like to learn new and interesting things about dogs. So we thought we would take this time to talk about a dog breed you may or may not really know about. The dog we will be talking about is called the Basenji and hails from Africa. Quite a unique little dog, it has been around for a very long time. You may have even seen one in a history text book.

Meaning “small wild thing from the bush” descendents of the Basenji were first seen five thousand years ago depicted on the walls of Egyptian tombs. Considered one of the oldest breeds in the world, the Basenji is originally from central Africa and what is today known as the Democratic Republic of the Congo. It is believed that the Basenji was delivered to the Pharaohs of Egypt as gifts. People have theorized that prior to being delivered as gifts to the Pharaohs; the Basenji lived in symbiosis with the Pygmies of central Africa. In other words, they could be found living in packs near Pygmy villages and shared a close relationship with them. Basenjis are considered great hunters and ratters and are still used for this purpose today in some parts of the world. The Basenji was first recognized as a breed by the American Kennel Club (AKC) in 1944. Today it is beloved by many dog owners all around the world.

The Basenji is a petite, smooth coated dog with an athletic frame. Its face is wrinkled around the muzzle and the forehead. The basenji has almond shaped eyes that range in color from hazel to brown. Also, the Basenji has pointy, little ears. In terms of color, the Basenji has quite a range. They can be black, tan, chestnut, copper, combinations of black, tan and black and even black, brindle and white. However, the AKC maintains that the standard should be that the feet, chest and tip of the tail be white. Perhaps one of the most distinctive traits of the Basenji is its curly tail. Males can range in height from 16 to 17 inches and can weigh 22 to 26 pounds. Females are slightly smaller and can range in height from 15 to 16 inches and weigh 20 to 25 pounds.

The Basenji is a great hunter and like the wolf, the female Basenji comes into estrus once a year. More interesting perhaps is the fact that the Basenji does not bark but makes more of a yodel-like sound. This is due to its flattened larynx. Some people make the mistake of thinking because the Basenji is quiet that it is inactive. This is not the case. The Basenji is very physically and mentally active. Considered very clean, the Basenji grooms itself like a cat and does not have an odor like most dogs. Bsenji fur is short and sheds little. The Basenji is a great climber and can easily scale a chain link fence. This breed also requires a lot of exercise and would be happy having a small yard to run around in. The Basenji would also do well in an apartment as long as it receives plenty of exercise. Moreover, Basenjis are happy living with other Basenjis, so if you are considering this breed as a future companion you may want to get more than one. If you would like to make a Basenji a part of your family, you can find one through a Basenji breeder as well as through a Basenji rescue organization.