Anyone who has spent much time with dogs knows they do some strange things. Every dog has his own personality, but there are some behaviors they all have in common. Have you ever wondered why your dog circles round and round before he lays down? Perhaps you have puzzled over why a dog rolls in gross things or buries his toys. These traits, or instincts, were common among canine ancestors long before dogs were domesticated. There are reasons why these behaviors were important to your dog’s predecessors. 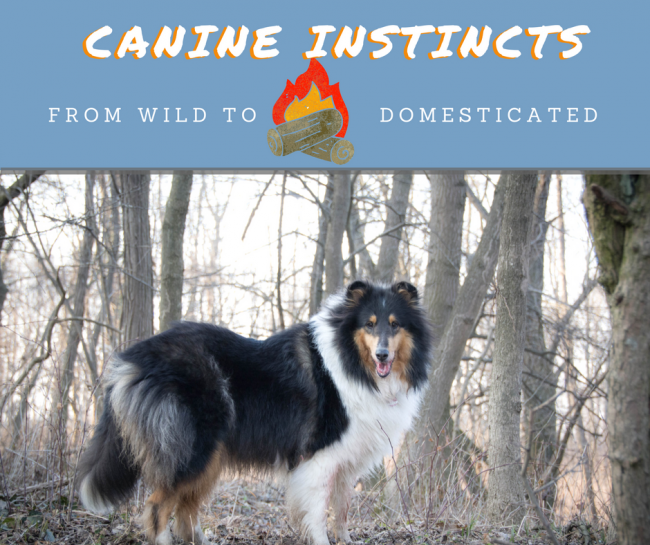 Dogs that lived thousands of years ago did not have a cozy bed or a pile of blankets to curl up in to sleep. They were forced to use their survival instincts to find an appropriate place to rest. They made their beds by circling round and round to mat down grass in summer or smooth snow in winter. In the process, they kicked sticks, stones, bugs, and any other undesirables out of the way. The furry friends that share our lives no longer need to make a bed in the wild. However, the ancient instinct to circle and tramp down a bed remains ingrained. So the next time you see your dog circling before he lies down to snooze, you will know why.

It is a bit more difficult to appreciate a dog’s habit of rolling in smelly things. Many feel that this disgusting behavior was a survival instinct for canine ancestors who had to hunt for a living. Wild ancestors rolled in animal carcasses and the dung of plant-eating animals to mask their own scent. It makes sense. For example, the scent of a wild dog approaching a herd of antelope would be immediately detected. The antelope would bolt and run for safety. A wild dog masked in familiar environmental odors had a much better chance of sneaking close enough to take down dinner. Your pup no longer has to roll in stinky things to catch his bowl of kibble, but the drive to disguise his odor remains. There may be times when the ancient instinct prevails. At least you will understand your dog’s motivation the next time you have to give an unscheduled bath to ‘freshen up’ your smelly dog.

Some dogs have the odd habit of burying their toys, or they may stash food, a chew bone or some other object. This behavior was also once key to the survival of canine ancestors in the wild. A wild dog often could not eat the entire animal he had hunted down. He certainly didn’t want to leave it around for others to dine on so he buried it. He safely hid his food so he could come back to eat more at a later time.

It is not surprising that our domesticated furry friends still feel the urge to dig and hide things. They may not hide food for their next meal, but the objects they hide are prized possessions in their eyes. It could be a favorite toy or a half-finished chew bone that he wants to visit later. He may hide it outside in some soft dirt or inside in a pile of laundry.

A dog’s family is his pack so he may decide to safeguard some of your things for you. If your watch goes missing from the nightstand or the TV remote can’t be found, you may want to check the yard, the laundry, under a couch cushion, or another place that your pup might think is safe.

From Past to Present

Circling before sleeping, rolling in smelly things, and burying prized possessions are behaviors that have origins in the long ago forerunners of modern dogs. After thousands and thousands of years, the dogs that share our lives still can’t purge the wild instincts ingrained in their ancestors. The next time your dog circles, gets smelly, or buries things, try to understand that he is not being bad. He is just living out the survival instincts passed down through many generations.