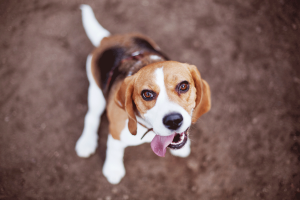 NuVet labs would like to congratulate the beautiful beagle Miss P (call name, Peyton. Official champion name, Tashtins Lookin For Trouble), the Westminster Kennel Club’s 2015 winner for Best In Show, which is quite a feat as she is only the second beagle to come away with this title at the Westminster Kennel Club Dog Show (P’s great-uncle Uno was the first in 2008). So what is it about Beagles that sets them apart from other dogs? In honor of Miss P, we thought we would celebrate by sharing some fun information about Beagles.

Identified as a breed

The Beagle was first identified as a breed by the American Kennel Club (AKC) in 1885 although the breed itself is believed to have been around since Roman times; however the beagle’s initial origins are not exactly known and remain a bit of a mystery.

A beagle’s ears can be up to seven inches long and believe it or not, these special ears help trap scents to keep them close to the beagle’s powerful nose, which is very helpful to a scent hound.

It’s all about the smell

The beagle is known as a scent hound which essentially means it hunts with its strong sense of smell rather than its sight. Beagles have an amazing sense of smell which has been prized by hunters the world over. Beagles are commonly used to help scope out and lead the hunters to their prey such as a rabbit or a fox. Being a scent hound has its benefits because instead of having to rely on their eyes, the beagle is able to follow the smell of the animal which can be more reliable and lingers long after that animal can no longer be seen.

Beagles are essentially controlled by their sense of smell. They must follow the scent! This can make the beagle a little harder to train than other dogs but training on a regular basis is highly recommended for a beagle parent. It is important to note that beagles have been shown to be challenging even for the most seasoned of dog people but with proper training and time a beagle will make it worth your while. Just remember to never take your beagle outside without having her on a leash or placed in a securely fenced in yard because if she smells something interesting she is going to have to follow it!

One of the greatest things about a beagle is how well they do with children and other pets. For this reason, they are hugely popular with families. Beagles are good natured and friendly and not known for being aggressive. And they will do anything for a treat.

One of the best things about the beagle is how healthy they are. It is believed that this is because all negative health traits have been bred out of the breed. For this reason, beagles rarely need special trips to the vet other than for their regular check-ups.

Clearly it is easy to see how Miss P won Best in Show. What a great breed the beagle is!